Our client Paul originally wanted Joe Hoffelt Construction to raze an old summer cottage he lived in. It was built in 1943. The floors sagged and were not level, and the walls needing some serious attention. It was decided to tear down the existing structure and build a new framework on top of the existing foundation, piers and beams once they were reinforced and leveled. 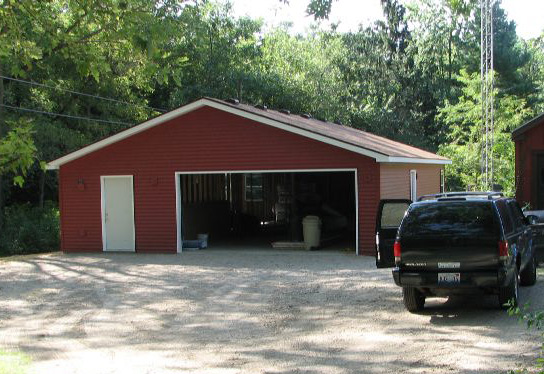 Paul was also looking for a new garage, and elected to hold off on the house project until we could build him a new garage on the property.

After getting the required permits for the garage, we started the work in earnest. Once the foundation was completed and the walls were up, roof trusses and the roof sheathing with shingles were installed. The project began to move very quickly. The exterior was sided with vinyl siding, and a new garage door was installed. Walls were insulated, drywall, taped, finished and painted. A heating system with a forced air furnace with ductwork was installed. The trim work and the painted floors were the final touch to make the project complete.

Once the job was complete, we moved across the driveway to the house proper. Before we could start the demolition, Paul and his wife had to move out of the house completely to do the job. Once the house was completely gutted – including the walls, electrical, plumbing and heating – we removed the old floor joist and sheathing that was rotten and crooked. We installed new concrete piers and beams.

Our team leveled out the floors in the entire house. The exterior walls were replaced with new energy efficient walls with insulation. All new electric including a new electrical panel were added. One new bathroom was added, and the main bath was rebuilt. New ductwork and a new energy efficient furnace and air conditioner were installed. New windows, doors, and exterior siding were completed along with new fascia and soffits. The walls and ceilings received new drywall that was taped, finished, sanded, primed and painted according to Paul’s specifications. Then, finally, we installed all the interior doors and trim. We installed all the new cabinets, and countertops in the kitchen, and then installed all the floors throughout the house.

Epilogue: Paul and his wife were very pleased with our work, and the time necessary to complete the project. Two years later we responded to another request to build a new deck on the front of the home, which was completed to their satisfaction in record time.